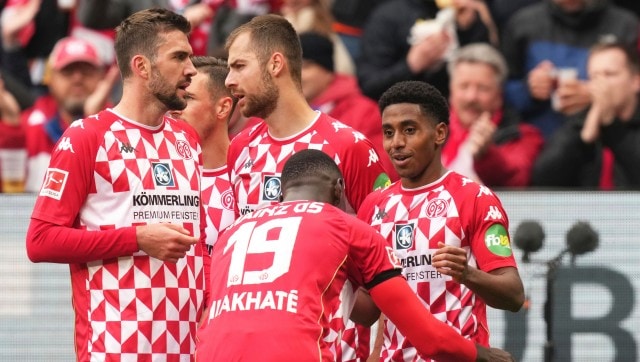 Bayern Munich manager Julian Nagelsmann was furious after his side’s lackluster performance at Mainz, who also hit the woodwork four times in a deserved win.

Bundesliga champions Bayern Munich suffered a hangover on Saturday with a shock 3-1 defeat at Mainz, while Erling Haaland netted a hat-trick even as Borussia Dortmund crashed 4-3 at home to Bochum .

A week after Bayern beat second-placed Dortmund 3-1 in Munich to be crowned league champions for the tenth consecutive season, Germany’s top two clubs have both lost.

Bayern boss Julian Nagelsmann was furious after his side’s lackluster performance at Mainz, who also hit the woodwork four times in a deserved win.

Explained: What Bayern Munich’s decade of dominance means for the Bundesliga

“There are too many losses, too many of the same,” fumed Nagelsmann.

“I think we still need a certain base passion in our game, which we didn’t have today.

“Not going to the limit in every situation is human after the tenth consecutive title, but we still wear the badge on our chest.”

The Bavarians pulled one back when Robert Lewandowski netted his 34th Bundesliga goal this season, claiming a league record having scored 18 away times this campaign.

Midfielder Leandro Barreiro grabbed Mainz’s third goal just after the break when his shot took a bad deflection and looped into the Bayern goal.

At Dortmund, Bochum took a 2-0 lead after just eight minutes thanks to goals from Sebastian Polter and Gerrit Holtmann.

Haaland led the fight converting two penalties and then netted his third goal with an hour left.

However, Bochum fought back with goals in the final ten minutes.

Juergen Locadia fired one before Milos Pantovic converted the winning penalty after a handball from Dortmund midfielder Axel Witsel.

Bochum picked up their second major scalp this year after February’s shock home win over Bayern.

– Home fans go after Dortmund – The Dortmund team walked away to the whistles of home fans.

“I can understand the fans being annoyed, but the guys didn’t deserve to be insulted like that,” said Dortmund coach Marco Rose.

“We are all mega disappointed.

“We reacted well after falling behind quickly, but when I look at the table and see 50 goals conceded (this season), it’s clear what the main problem is.”

Freiburg later climbed back into the top four and into the Champions League places with a thrilling 4-3 victory at Hoffenheim.

After Hoffenheim led 2-1 early in the second half, Freiburg roared with goals from captain Christian Guenter, Lucas Hoeler and South Korea’s Jeong Woo-yeong before Sebastian Rudy netted a late third. game for the hosts.

Cologne climbed to sixth place and remain on course to play European football next season after a 4-1 loss at Augsburg with Anthony Modeste scoring twice.

Stuttgart remained hopeful of avoiding relegation as midfielder Chris Fuehrich equalized late on the crossbar to earn a 1-1 draw at home to Wolfsburg.

Stuttgart remain 16th, leading to a relegation play-off at the end of the season.

They have two tough games left – away to Bayern and at home to Cologne – to close the four-point gap to 15th-placed and secure safety next season.

Hertha Berlin, who have four points and a place above Stuttgart, are still not sure of avoiding relegation after a 1-1 draw with second-from-bottom Arminia Bielefeld.

Hertha cruised to an away win thanks to a header from midfielder Lucas Tousart before Swedish defender Joakim Nilsson nodded in a final equalizer for Bielefeld.

Inter Milan vs Udinese odds, picks, how to watch, live stream: May 1, 2022 Italian Serie A predictions