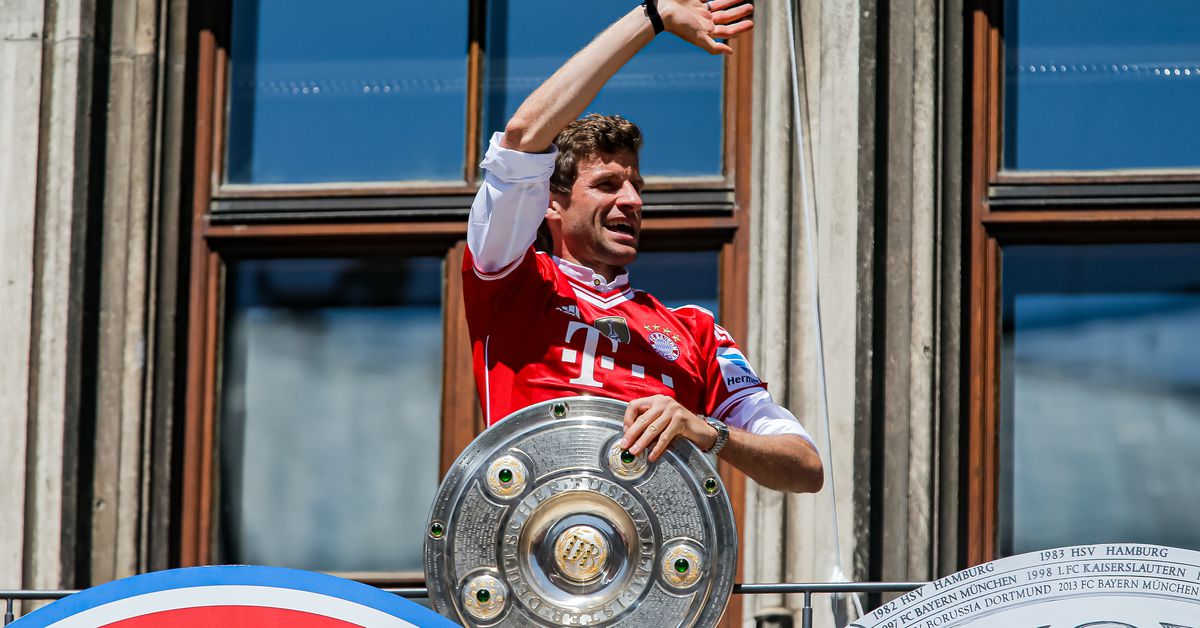 When do you normally win a league title? Well, if you look at Europe’s top five leagues, you’ll know that sometimes it’s a close affair, sometimes it even comes down to the last day, but also sometimes it’s over well in advance. For example, England and Italy had very close title races last season, while the champions of France, Spain and of course Germany saw less pressure on the final matchdays.

As a team that has won ten league titles in a row, Bayern Munich have had their fair share of different title runs, some going all the way to the end and some rather relaxed. Today’s chapter will look at the polar opposites: the first title won and the last.

Bayern Munich made history by winning their tenth successive Bundesliga title, a new record for Europe’s top five leagues. The Serienmeister Stream is a ten-part stream that covers ten particular aspects of this glorious decade. Enjoy!

The 2013/14 season was the first season under Pep Guardiola, and the one just after Jupp Heynckes’ record season. All eyes were on Guardiola to see if he could continue Jupp’s reign of glory. Well, it turns out he could, at least on a national level.

Bayern started the season with six wins and one draw, the latter at SC Freiburg. However, it took eight matchdays for Bayern to finally top the table with a draw against Bayer Leverkusen. From there, everything went well. Bayern rode win after win until they faced second-placed Borussia Dortmund. Yet BVB became just another victim of Bayern’s rampage as the Bavarians beat them 3-0 in their own backyard to solidify their place at the top of the table.

In the last five matches of the year, Bayern conceded just one goal while scoring 18. The new year brought fans a bit more joy with a ten-game winning streak, beating the sworn enemy Borussia Mönchengladbach and avenging their lost points at Freiburg and Leverkusen. After 26 matchdays, Bayern needed just one more win to successfully defend the Bundesliga crown. A trip to Berlin awaited him. Could this be the last step?

Two early goals from Toni Kroos and Mario Götze put Bayern two up at half-time, and despite conceding a second-half penalty, Franck Ribéry got on the scoresheet to give the Bayern a well-deserved victory in the German capital. Bayern had won the Bundesliga again and broke the record they set just a year ago for the fastest win in Bundesliga history. No team had ever won the Bundesliga on Matchday 27, let alone at the end of March.

Although the team suffered a slight decline over the next three games, there was no need to worry as they picked up their pace and finished the season with four straight wins. It was a very successful and memorable season. Guardiola’s time at Bayern can be watched carefully, but he had his moments, and this Bundesliga season was one of them.

Bayern’s ten consecutive Bundesliga wins have not all gone smoothly. One season in particular was a mad dash for the title. Niko Kovač’s side were not well placed in the Hinrunde. Four straight wins to start the season saw Bayern top of the league, but fell to sixth after a three-game winless streak. Although the team pieced together two wins, another three-game winless streak saw them fifth, outside the Champions League places, nine points behind leaders Dortmund and well and truly out of title contention.

Or at least that’s what everyone thought.

A sudden resurgence in November saw Bayern climb up the table with five straight wins to close out the year (and this writer was live in the stadium the last two), keeping four clean sheets and conceding just once. The turn of the year saw Bayern come back strong. Despite a 1-3 loss to Leverkusen, the team otherwise took their job very seriously and didn’t drop any more points until March. In the aftermath, they finally regained their place at the top of the Bundesliga after a 6-0 victory over Wolfsburg.

A 1-1 draw with Freiburg saw Bayern momentarily slip back into second place, but a massive 5-0 thrashing from Dortmund put them back in first place a week later. Dortmund lost even more points as Bayern continued to gain more, and the seemingly insurmountable nine-point gap was soon widened to four points in Bayern’s favor with just two games to go.

Bayern dropped points in their penultimate game against RB Leipzig (whom they beat solidly two weeks later in the DFB-Pokal final), and the gap was reduced to two points before the last daytime. A win against Eintracht Frankfurt would see Bayern crowned champions, but a draw would also do the trick thanks to a crushing goal difference.

However, the defending champions left nothing to chance and quickly imposed themselves thanks to Kingsley Coman. Although they conceded an equaliser, they got two more early goals through David Alaba and Renato Sanches to put the game to bed. Outgoing legends Franck Ribery and Arjen Robben also scored a goal each to cap a 5-1 win for Bayern and their seventh successive Bundesliga title.

And so it was. An almost impossible task had just been accomplished. From nine points to two points clear, Bayern did not give up until the very last second and were rewarded for their gargantuan effort. This may have been a hard-fought season, but it’s also one that has showcased Bayern’s winning mentality, a trait few other valuable teams can match. A trait that has taken Bayern to the top of the world several times, to the top of Europe six times and, of course, to the top of Germany ten years in a row.