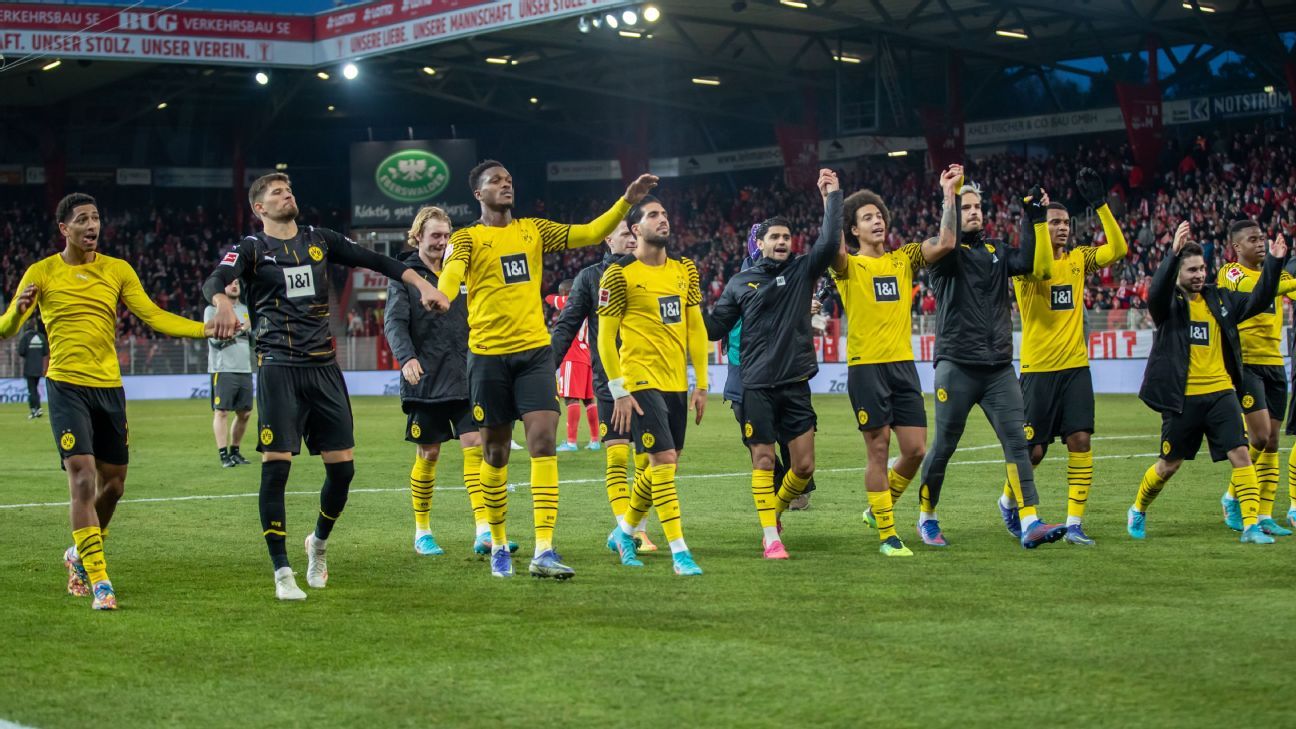 In this edition of his weekly column, ESPN’s senior Bundesliga commentator Derek Rae writes that while Borussia Dortmund are technically in the hunt for the league title, no one at the club wants to talk boldly about winning Bayern. Munich. The team’s plans for the future are intriguing, but several question marks hover over them. Overall, it is an uncertain time.

Admit it: some of you were waiting for Borussia Dortmund to live up to all the clichés about them last Sunday. Bayern having suffered a hair-raising and chaotic 4-2 loss at VfL Bochum the day before (stream the replay on ESPN+ in the US), the scene seemed set for Schwarzgelben to spoil their chance to reduce the deficit at the top of the Bundesliga table to six points. After all, it’s happened before.

Instead, Marco Rose’s side delivered one of their most assured performances of the season as they accelerated away from Union Berlin at Kopenick. There was nothing flattering about the 3-0 triumph in which captain Marco Reus scored twice in the first 25 minutes and played a starring role (stream the replay on ESPN+ in the US).

In most leagues, being six points behind with 12 rounds remaining – and a head-to-head with the leaders to come – would represent a fighting chance. However, from Dortmund’s perspective, the specter of Bayern’s nine successive titles looms large and no one dares to get carried away at a single swing of the clock. After all, Dortmund had spent the past week at their Brackel HQ, digesting and trying to remove from the collective memory bank an error-ridden 5-2 loss at home to their closest pursuers in the battle for second place. : Bayer Leverkusen. First of all.

So what did BVB do well in the southeastern outskirts of Berlin? It started with much more effective form in a 4-2-3-1 formation that allowed much better protection from a previously exposed back four.

One of Dortmund’s problems this season has been getting caught by the opposition as they Aufbau (or “build-up”) themselves. The new form, with midfielders Axel Witsel and Mahmoud Dahoud acting as windshield wipers, has allowed Dan-Axel Zagadou (who endured a nightmare against Leverkusen) to look much calmer. Having Mats Hummels healthy again by his side in defense also visibly helped.

The other benefit of this tactical adjustment was that it put Reus in his preferred No.10 position. At times, in Rose’s oft-favorite 4-3-3, Reus had to move further to the right of attack and he’s never quite the same potent threat when he’s not immediately behind the main striker, from where he can make well-timed runs. and cause havoc for those tasked with retrieving his movement.

Criticism was leveled at BVB for their overreliance on Erling Haaland and Jude Bellingham, but Haaland was again out due to his muscle injury and Bellingham had one of his most ordinary outings.

After the victory, having closed the points gap, Reus and Hummels refused to be drawn into discussions about what it would take to ‘stop’ Bayern. Reus looks like he’s had enough of this kind of talk, and he said it. Hummels felt it was more important to be 12 points ahead of fifth-placed teams, including Union.

Cementing a Champions League spot is the No. 1 priority. Avoiding mishaps in this pursuit, as opposed to chasing the recording mastersomething that former Bayern central defender Hummels considers a good thing to dream about more than a realistic scenario, represents the realpolitik of the situation in which Dortmund finds itself.

Remember: Dortmund had to give up from start to finish to enter Europe’s premier club competition. The fact that they failed to progress from what looked like a manageable Champions League group this season is a bitter disappointment. Club CEO Hans-Joachim Watzke has tried to motivate the players in the Europa League knockout stage, which kicks off against Rangers on Thursday. Win a trophy that BVB have never won before, according to logic, and recoup some of the money lost in the Champions League mishap. It may be difficult, but why not?

With 2. Bundesliga upstarts St. Pauli having knocked out holders Dortmund from the DFB-Pokal, one gets the feeling that they are a side that feel they have something to prove in every game. Better than the others, apart from Bayern, but still well below their main enemies.

Looking ahead, the summer promises to be exciting. Michael Zorc will step down from his sporting director chair after nearly a quarter of a century, and it will become Sebastian Kehl’s show. Kehl, a big club (like Zorc) on the pitch, have already pulled off a coup by securing Niklas Sule from Bayern as a free agent for next season, and they will do their best to sign Nico Schlotterbeck from SC Freiburg and FC Salzburg. Karim Adeyemi.

Of course, there will be departures to bear, and probably important ones if Haaland and Manuel Akanji decide to end their respective stays at the club. There is also always a big concern about a lack of depth; for example, there is always a right-back problem. Thomas Meunier has improved this season, but were fans expecting a more complete player? I believe him. The scarcity of strong options at both fullback positions is alarming.

Hand on heart, did Nico Schulz exude confidence when he replaced Raphael Guerreiro? Not especially. Schulz seems to me to be someone who really needs to play every week, but for a club a little lower in the rankings.

That said, there’s plenty to be excited about. In Giovanni Reyna, Dortmund have the kind of young talent who can light up any top league with his dynamism. But Kehl’s challenge is to find the right balance of squad, not just sparkling individuals, which has been elusive for BVB for several years.

The law of averages says that one of these years Bayern will slip, even if only marginally. Borussia Dortmund need to make sure they are armed enough to clench their fists when that happens.