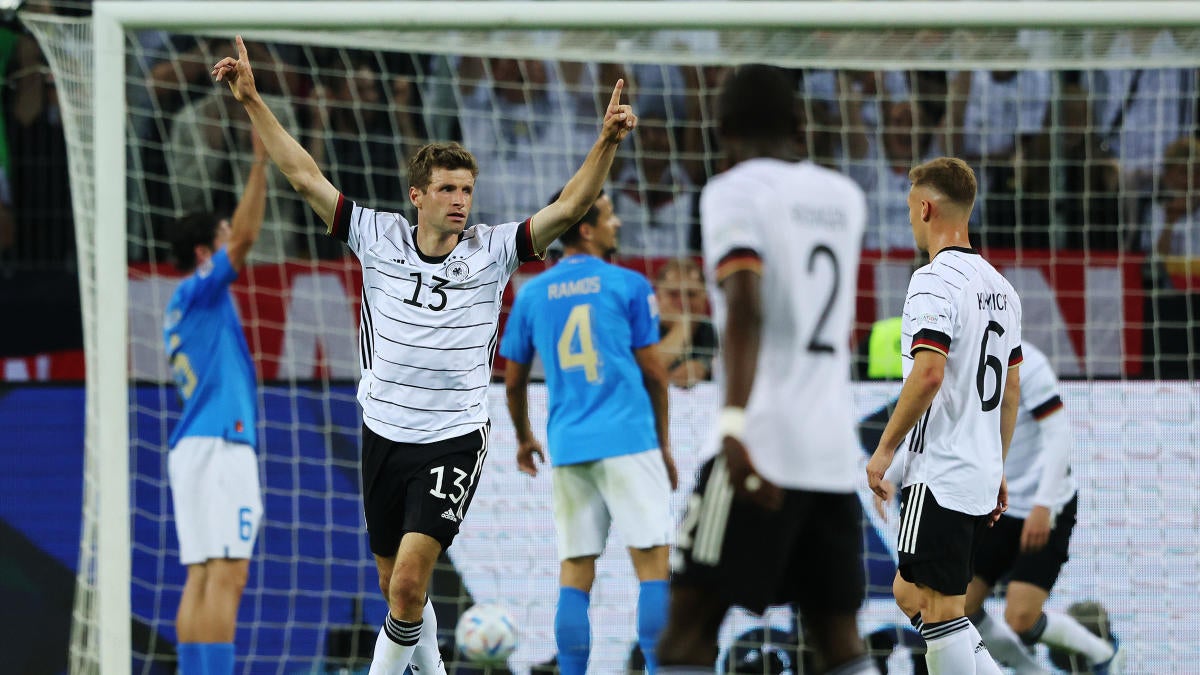 Italy had no chance on Tuesday night at Borussia Park in Mönchengladbach when Germany dismantled the Azzurri, 5-2, in the UEFA Nations League.

The Italians didn’t look like a team that would lose by three early on, but as soon as the first goal was scored, Roberto Mancini’s side crumbled. Germany dominated in all areas of the pitch, especially in defense where they did not concede much to the guests. Joshua Kimmich scored in the 10th minute and a penalty scored by lkay Gündoğan in the dying moments of the first half gave the Germans a comfortable 2-0 halftime lead, and they never looked into back.

The second half saw Italy attack at first, but then it was all Germany with a goal scored by Thomas Muller and a two-minute brace from Chelsea striker Timo Werner. 18-year-old Italian rising star Wilfried Gnonto managed to score his first goal for the Azzurri and became the youngest goalscorer in the history of the Italian national team. Alessandro Bastoni’s last-minute header cut the gap to three before the final whistle.

As things stand, Hungary top the group (7 points) after a 4-0 thrashing against England, while Germany (6 points) overtook Italy with the win. Italy (5 points) and England (2 points) are at the back of the pack.

Germany is back on track

After three straight draws, Germany finally managed to claim their first UEFA Nations League group stage victory against Italy and showed good improvements. The defensive frame was incredibly solid thanks to the return of Real Madrid new player Toni Rudiger. Italy didn’t do much in the first half to find a breakthrough, but Hansi Flick’s defense was particularly strong and showed improvement from the previous three matches. Hoffenheim left-back David Raum put in another outstanding performance and was certainly one of the best players to date under the Flick regime.

It is no coincidence that the two goals of the first half came from the two midfielders: Gündoğan and Kimmich. The two go very well together and they leave Flick no choice but to play them consistently – not only because of their experience, but also because of the way they connect defense with forwards. All in all, while there were negative aspects in the first three matches of this group stage which raised some doubts about this team, this game against Italy showed that Germany are still among the teams to watch. for the 2022 World Cup.

Mancini has embarked on a new cycle after failing to qualify for the World Cup. Many signs confirm that this cycle is still in its infancy. The Italian tactician is trying to bring new faces into the team, especially with young prospects who even struggle to find Serie A minutes.

It all starts with Gnonto, who was given the go-ahead to start on Tuesday after strong performances off the bench in previous matches. He lived up to Mancini’s intuition and managed to score his first career international goal at senior level while breaking a record for the youngest goalscorer in program history in the process. Gnonto (born in 2003) decided to leave the Inter Milan youth team to join Zurich where he played last season. He bet on himself and as a result he is now in talks with several Bundesliga and Serie A clubs. Mancini was brave enough to consider him for the national team, alongside other young players like Giorgio Scalvini from Atalanta and Giacomo Raspadori from Sassuolo.

That said, the 5-2 thrashing showed that this is not enough to guarantee an immediate winning future for Italy. It is sure that these players need more time, patience and more games in their legs. It’s a long-term project that may test the patience of Azzurri fans, especially after failing to qualify for back-to-back World Cups. Mancini needs to make real improvements in a short time.