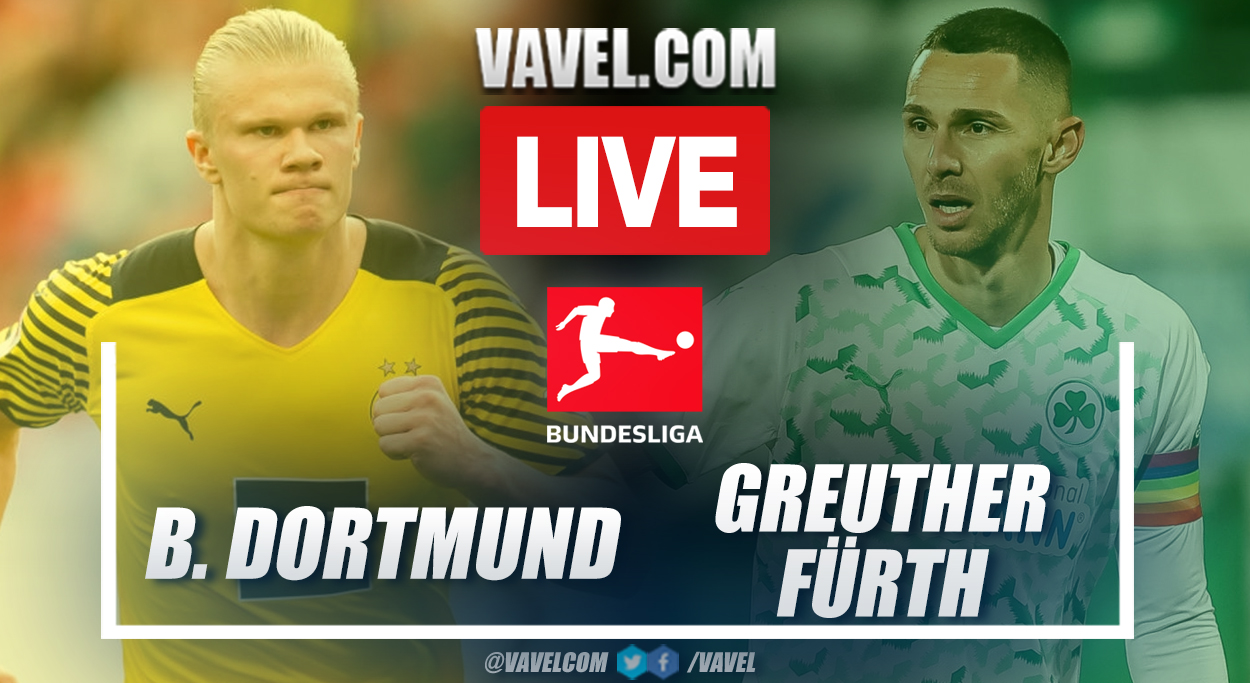 The game at Signal Iduna Park is over. Borussia Dortmund won 3-0 against Greuther FÃ¼rth to continue to increase their score and stay in second place in the Bundesliga.

Three additional minutes will be played in the match.

Donyell Malen! The Dutchman received the cross pass from Julian Brandt and beat MeyerhÃ¶fer on the ball with goalkeeper Burchert already on the line.

Julian Brandt took a free kick from the right and Erling Haaland stood up to direct the ball to the left post.

80 ‘Last straight line of the match

We are entering the last ten minutes of the match. Borussia Dortmund have regained control of the game and start playing more in the opposition’s half, which they lacked in the second half.

It wasn’t a good second half for Borussia Dortmund, who didn’t dominate in any part of the pitch, although they didn’t suffer from the game either.

A ball sent from the left to Jamie Leweling, who shot without releasing it and Havard Nielsen failed to push the ball past the goal.

The start of the second half was a bit more balanced than in the first half, but FÃ¼rth didn’t create much danger.

The second half begins

The second half of the match is underway.

Two extra minutes will be played in the first half.

Jude has been cautioned for Dortmund.

Jetro Willems has been cautioned for FÃ¼rth. Dangerous free kick for Dortmund.

Brandt’s deep ball to Marco Reus, who finished, but goalkeeper Burchert made good use of the space.

Erling Haaland subtly shot at the right post, beating the goalkeeper. Now the score was on.

The game is still tied at this point. Not much to highlight so far in the game.

25 ‘A game without much emotion

FÃ¼rth managed to hold Dortmund back and then try to make them uncomfortable with their transitions. The match remains 0-0.

After examination, the game is invalidated for offside.

A good through pass from Haaland to Hazard, who finished in front of the keeper. The game is reviewed by VAR for possible offside.

Dortmund still haven’t found the space in FÃ¼rth’s defense. Marco Rose’s men are in charge but failed to register on the scoreboard.

Mats Hummels has been cautioned for Dortmund.

10 ‘The match is still tied

Dortmund hold the ball, but do not generate danger for the moment.

Dortmund try to keep possession of the ball at all times and not allow FÃ¼rth to play.

The match is underway between Dortmund and Greuther FÃ¼rth.

Happy to see you again

We are now ready to bring you the action from this match between Borussia Dortmund and Greuther FÃ¼rth on Bundesliga Matchday 16 2021-22.

In a few moments we will share with you the starting XI of the Borussia Dortmund vs Greuther FÃ¼rth live match, as well as the latest information from Signal Iduna Park. Don’t miss any detail of live match updates and commentary from VAVEL coverage.

How to watch Borussia Dortmund vs Greuther FÃ¼rth live on TV and online?

What time is Borussia Dortmund vs Greuther FÃ¼rth for Bundesliga?

The match will be played at Signal Iduna Park

My name is Jhonatan Martinez and I will be your host for this match. We’ll bring you pre-match analysis, score updates and live news here on VAVEL.

Sergio Agüero retires: why he is a great modern | UEFA Champions League