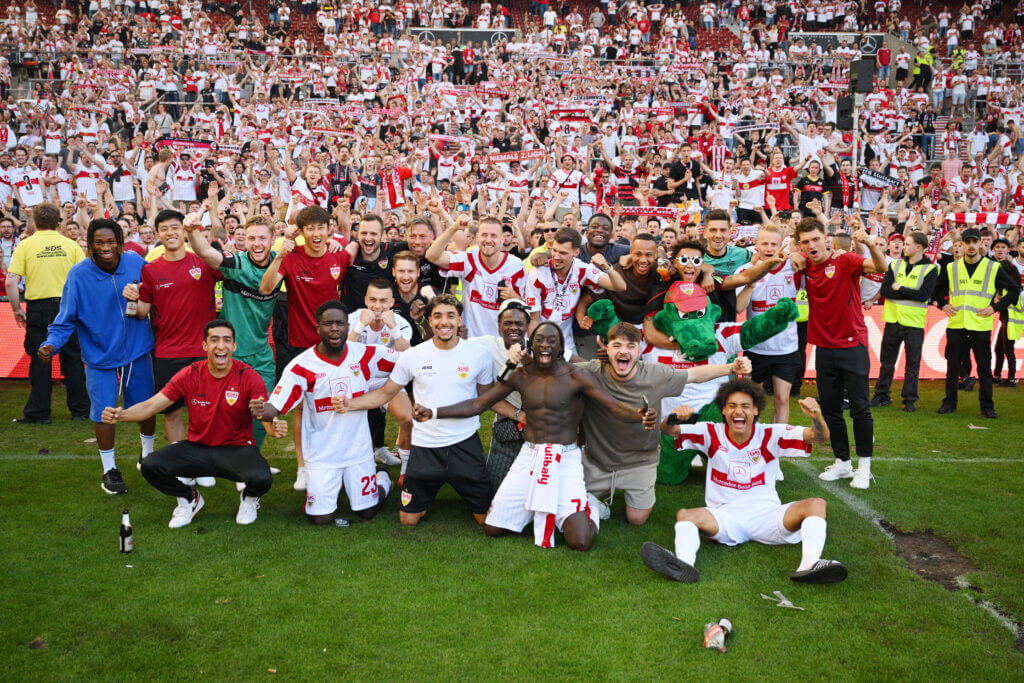 Born and raised in New Jersey, Pellegrino Matarazzo never really ran the risk of being confronted by an alligator. However, last Saturday, he found himself struggling with one of them on the lawn of the Mercedes Benz Arena of VfB Stuttgart.

Granted, that probably sounds more dramatic than it was. After all, the alligator was as cuddly as you imagine a mascot named Fritzle. The scene, however, was just one of many outbursts of passion, relief and pure joy that Stuttgart manager, staff, players and fans experienced that day, before their unity culminated. in spectacular joint celebrations on the pitch. Moments earlier, Wataru Endo literally put ‘endo’ in the endorphins by scoring a last-minute header to secure the club’s Bundesliga status on the final day of the season.

Six days later, Matarazzo is still speechless. “What happened that day was so intense that for a lot of the team it took days to deal with it. I’m still processing it now. It was hard. pure ecstasy, a climax that cannot be expressed in words,” he says. Athleticism.

Nevertheless, 44-year-old manager and VfB fan Andreas Zweigle, co-founder of the Stuttgart blog ‘Vertikalpass’, tries to give insight into a grueling but magical day inside the Mercedes Benz Arena.

In order to even have a chance of survival in the Bundesliga, VfB Stuttgart needed a lot of resilience throughout the season.

Having wowed the Bundesliga with their youthful energy in their first campaign after the 2020-21 promotion, the side effects of VfB Stuttgart’s almost dogmatic approach, labeled ‘Young and Wild’, have dragged them onto the table in 2021. -22.

“It was a matter of perseverance,” says Matarazzo. “It was a challenge that we took up as a team, not only the players and the coaches but also the directors, the club management, the staff, everyone. We always believed in it, kept our calm and forced our fate.

After snatching a point from Bayern in the penultimate game, Stuttgart were even able to avoid a dramatic relegation play-off against third in Bundesliga 2 and ensure safety. They needed a home win against Cologne, who still had a chance in the Europa League, and Hertha BSC to lose to Borussia Dortmund, who had nothing to play for.

The stakes were high, but remarkably, everyone involved seemed calm on this beautiful Saturday afternoon. “Nobody talked about relegation. There was this calm confidence in the air,” says Zweigle, who attended his first match in Stuttgart with his father in the 1970s. Athleticism on the mood among the 58,400 fans that day.

Inside the stadium, it was not much different. “We’ve been under pressure all season,” says gray-bearded Matarazzo. “There’s always tension before a game, but we focused on what it would take to get the job done and the positivity that came with the opportunity to stay put. We believed in it and we did it. shown from the first minute.

Indeed, they did. Stuttgart smothered Cologne with raw intensity, hunger and determination and forced a penalty just 12 minutes into the game. To everyone’s disbelief, top scorer Sasa Kalajdzic missed, to score with an imposing header from the next corner 23 seconds later. 1-0 Stuttgart.

The celebrations did not last long. Next to season ticket holder Zweigle was a fan watching the Hertha game on his phone. And to their dismay they saw how Hertha surprisingly went up 1-0 via a soft penalty at Dortmund after 18 minutes. It was just the start of a roller coaster ride.

By half-time, the game 400 kilometers to the north had become the center of attention for most fans at the stadium. “We should have led 4-0, we thought our victory was a formality. We couldn’t believe Dortmund weren’t doing their part,” Zweigle reflected on the half-time chatter.

There was a similar feeling inside the locker room. “You could feel the players had discovered the score in Dortmund, but we focused on our performance. It was a great half,” Matarazzo recalled.

As so often this season, however, Stuttgart’s waste in front of goal would come back to haunt them. Cologne looked sharper at the start of the second half and, thanks to a blunder by VfB goalkeeper Florian Muller, Anthony Modeste netted the equalizer in the 59th minute. “I couldn’t believe it,” laughs Matarazzo, still in disbelief. “Everything was going badly, but there was no teasing, we tried to encourage them,” says Zweigler.

Only nine minutes later there was a spark of hope: Dortmund scored the equalizer, which, unlike Hertha’s goal, was displayed on the video wall this time. “That was the signal for us. From then on the atmosphere was like a long goal scream, it was so loud,” Zweigle reports.

Stuttgart improved but failed to create chances as the clock ticked down. With six minutes to go, the initial spark turned into a flame of support: Dortmund had taken the lead over Berlin – Stuttgart needed just one goal to secure safety. The sequel is exceptional.

“The result woke us up, but it was the fans who gave us the energy,” Matarazzo explains in his typical analytical manner. Then, however, he raves. “I’ve never seen anything like it in my life. How can a stadium of 60,000 people create such a charge of energy that almost magically propels the team forward. Those five minutes when that wave of hope and will overflows and gives you the feeling that we are going to score a goal now.

The ending felt almost scripted. Two minutes after the start of added time, Stuttgart forced a corner. Although they went into full “instinct mode” on offense, as Matarazzo calls it, they returned to a routine that was rehearsed and tailored specifically to the opponent. Chris Fuhrich aimed for the near post, Hiroki Ito headed it in and Endo put the ball into the roof of the net with a diving header.

A snap later, Stuttgart fan Zweigle found himself a row under his current seat, hands over his face, beer in his neck. “I had no idea how it happened or how I ended up where I was, I just knew we had scored. We were a gigantic ball of sweat-soaked fans. My friend burst into tears .

On the pitch, Matarazzo exploded out of his training area and headed for the left corner of the pitch, desperately looking for someone to hug and eventually finding himself deep in a crowd of players and , of course, the mascot Fritzle. “You don’t think, you’re just driven by emotions, I was on autopilot.”

When the news reached Dortmund, Hertha looked paralyzed as the scoreline remained 2-1. Back in Stuttgart, Matarazzo now had to reimplement the defensive structure in the game by shouting instructions, getting booked in the process for getting too close to the action.

It worked. His side successfully defended the remaining six minutes until the final whistle was drowned out by a collective outcry that echoed through the Bad Cannstatt neighborhood.

There was no restraint now. Fans from all corners burst onto the pitch, as little by little the green lawn was soon completely covered in white shirts. “Everyone was overwhelmed when the pressure dropped. We felt how important it is for the club, but also for the region. The images after the game were unforgettable,” recalls Matarazzo.

Granted, it wasn’t perfect, as police later spoke of a few injuries during the tumultuous scenes. However, the vast majority created scenes from a football novel. “Strangers were cuddling, tough guys were crying. It was beautiful,” recalls Zweigle. Borna Sosa, stripped of his underwear, and Kalajdzic – who could have played his last match for the club – were carried on their shoulders, fighting back tears. Fans cut up pieces of pitch and dismantled goal posts for memories of the day they so dramatically avoided relegation.

It’s a club that was German champion 15 years ago, a club that beat Manchester United in the Champions League 19 years ago. Still, Zweigler insists, “I’ve never experienced anything like this before.”

For one thing, like any good story, it was the construction that made the ending so special. “It was so emotional because of the drama of the whole season, ups, downs, until the last game,” says Matarazzo.

On the other hand, it was the undeniable effect of the fans on the result of the match. The boss was keen to highlight striker Endo, but ‘the winning goal belongs to the fans’.

In the end, it was the two teams that made the miraculous escape possible, those on and around the pitch and those in the stands. “At the start of the game, the players energized the stands with their intensity. Then, when things went against the team, it was our turn to pick them up,” says Zweigler. “It was the perfect symbiosis between fans and players.”