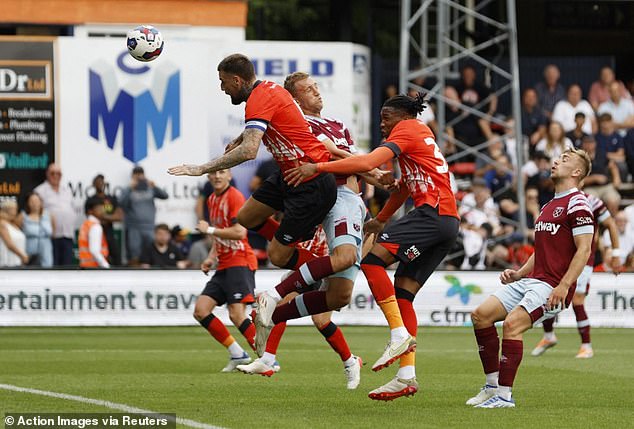 By Kieran Gill for MailOnline

Luton Town’s Kenilworth Road is a world away from some of the pre-season environments enjoyed by other Premier League globetrotters.

Still, this creaky old stadium seemed as nice a place as any to stretch your legs – until a last-minute Luton goal denied victory to David Moyes’ West Ham.

All looked rosy as two minutes of stoppage time was announced. West Ham were leading 1-0 thanks to a combination that Moyes hopes will pay dividends in the coming season. Aaron Cresswell had crossed the ball from the left and Tomas Soucek had headed a header looking into the far corner.

Moyes would return to that routine in two weeks’ time when West Ham open their Premier League season against Manchester City at the London Stadium.

Still, with their first real chance of the contest, Luton equalized after a corner kick was driven home by Sonny Bradley, making it 1-1 in the dying seconds.

Moyes’ men should have scored two or three goals at this stage, but Ethan Horvath, the United States international in goal for Luton, was in one of those moods.

Horvath stopped Nikola Vlasic from burying one in the bottom corner and then Michail Antonio when he was one-on-one. While it’s a smart save, it’s this clinical lack of Antonio that makes you think West Ham still need to sign a striker before this transfer window closes.

Moyes had some rejigging to do on his defense following injuries. Nayef Aguerd remains sidelined with an ankle problem picked up in their last friendly against Rangers, with the £30m centre-back set to miss the start of his Premier League season. The club have yet to set a timeline for his recovery as they wait for the swelling in his ankle to subside before sending him for another scan.

Soucek celebrated with his fellow Hammers, although they had to share the result at the end

Declan Rice was one of many high quality players exposed to Luton Town fans.

Likewise, Issa Diop and Craig Dawson were nursing knockouts so didn’t feature here at Luton, while Angelo Ogbonna is with the Under-21s.

Because of this, Moyes deployed a back three of Ben Johnson, Kurt Zouma and Aaron Cresswell, with Vladimir Coufal and Arthur Masuaku as full-backs.

West Ham were sloppy at the start, Declan Rice among those playing a few loose passes. But they quickly imposed themselves on their opponents in the Championship.

Soucek’s header came in the 27th minute and from there it looked like a routine run. No overwork, no injuries, no worries for Moyes. There was a second-half appearance for Flynn Downes, West Ham’s £12m new signing from Swansea, while a few youngsters, like Conor Coventry and Harrison Ashby, also got a few minutes.

But the Luton leveler has denied West Ham another pre-season win in their preparations for Pep Guardiola’s City machine on August 7.