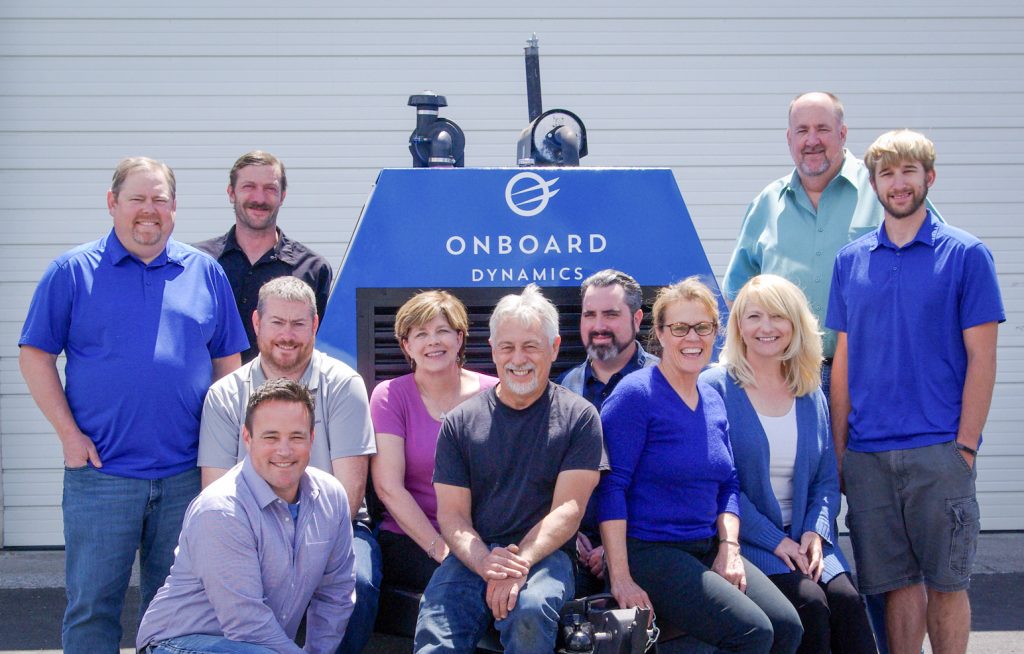 Rita Hansen was losing sleep and grappling with anxiety. Like many small business owners and startup CEOs, she spent the past several weeks submitting applications and waiting nervously for federal funding that could keep her Bend, Ore., company afloat amid the coronavirus crisis. Many entrepreneurs reported delays, bureaucratic hurdles, eligibility confusion, and other issues that made it difficult to apply for loans.

But this past Thursday, her CFO called. Onboard Dynamics was one of 1.6 million companies to land much-needed cash from the $349 billion Paycheck Protection Program, part of the $2 trillion CARES Act.

The loan will help Hansen continue paying her 12 employees, who build natural gas compression machines used by commercial fleet vehicle operators. The 6-year-old startup had already reduced hours and executive salaries to trim expenses as all of its projects were paused.

“This is a lifeline so that we can keep the team intact,” Hansen told GeekWire. “We’re going to use this time to get some good work done and be well-positioned to not only survive, but to succeed.”

Onboard Dynamics’ story illustrates the federal relief program’s potential to make a meaningful difference for startups that might otherwise need to make deep cuts, or go out of business entirely, as COVID-19 shuts down large swaths of the economy. Many others were not so fortunate. PPP relief money ran out on Thursday, less than two weeks after the application process opened, leaving many companies frustrated with what seemed like a random process.

Allie Magyar, CEO at Vancouver, Wash.-based event management software startup Hubb, said her bank could not manage the loan volume and approval processes. Even though Hubb submitted applications as soon as possible, it did not receive funding.

“The process was difficult and confusing and frustrating,” Magyar said. “No one could tell us what was required, what forms to fill out, what process would look like. In the end, our bank flubbed our applications by batch processing loans, versus hand submitting, so none of them were processed.”

For many startups, the outcome is still unclear. “We applied, and the process was a mess — we’re still not certain of the results,” said Dan Shapiro, CEO of Seattle 3D laser printing startup Glowforge, in an email to GeekWire on Sunday night.

“The PPP loan would give us a small but meaningful boost in continuing to build the business and weather the storm,” Brace said.

Tyrone Poole, CEO of Portland housing startup OneApp, said he applied for PPP funding with multiple banks, but hasn’t received any confirmation of approval. His company, an online rental marketplace that helps renters pre-qualify for housing, has seen revenue drop by 50%. The 7-person startup furloughed two workers and cut salary for the remaining staff. Poole, a father of five daughters, is not taking salary for the foreseeable future.

“I feel helpless,” Poole said. “I feel like I’ve done everything I can and it amounts to nothing, except a bunch of ambiguity. It’s a hard place to be.”

One Seattle startup CEO said the process to apply for PPP funding was a “total shitshow.” The company applied as early as possible with several banks. The CEO wished to remain anonymous so as not to worry his employees.

“Ultimately we don’t feel like we have a clear understanding from anyone on the priority around how the funds are being allocated, and the timing around the allocation,” the CEO said. “As you can imagine, ‘wait and see’ is not an option for most small business owners at this time.”

The $349 billion relief package meant to save struggling small business from oblivion has run out of money. Let’s count the ways it was a catastrophic failure:

Nearly 50,000 small businesses in Washington and Oregon will receive a combined $10.7 billion in PPP loans, according to the latest update from the Small Business Administration. Congressional lawmakers are working to unlock additional funds for the program but Democrats and Republicans have struggled to reach a compromise.

[Update: Lawmakers agreed Tuesday to provide an additional $310 billion to the PPP program.]

The National Federation of Independent Business last week said the federal government should issue another $400 billion in PPP loans, at least half of which should go to companies with less than 20 employees.

TELL US YOUR STORY: Has your Seattle-area startup applied for a PPP loan? We want to hear about your experience. Email us at [email protected]

The PPP loans are forgivable for qualifying small businesses that retain their workforce or use the money to rehire laid-off employees. Businesses can apply for up to 250% of their monthly payroll.

The average loan size was $206,000, according to the SBA. The “professional, scientific, and technical services” industry garnered the most approved loans, with 208,360, and was second to construction in approved dollars, at $43.3 billion. There were 4,975 lenders.

Many venture-backed tech startups weren’t sure if they were eligible for PPP funding due to complex SBA “affiliation” rules related to their investors. A company may be deemed an affiliate of a larger entity, such as an investment firm, which could disqualify a PPP application. The National Venture Capital Association issued guidance for VC-backed companies earlier this month.

One Seattle startup we spoke with had its PPP application approved, but was considering not accepting the loan because the company is in the middle of fundraising and may no longer be in compliance. The CEO did not want to discuss the situation on the record given the uncertainty of the situation.

Another Seattle-based startup, Usermind, did not apply due to concerns about the PPP application requirements, said CEO Michel Feaster.

The PPP has also also sparked an ethical debate over whether investor-backed startups should apply when so many companies with fewer resources are struggling, such as mom-and-pop restaurants.

“My bank, the @sbagov, the @whitehouse and so many other banking institutions failed the small businesses of America,” top Seattle restaurateur Eduardo Jordan wrote in an Instagram post Saturday. “There was no infrastructure and still isn’t any to help those that need the most help.”

Companies with more than 500 employees are not eligible. That means that many of Seattle’s largest venture-backed tech startups, such as those near the top of our GeekWire 200 ranking of Pacific Northwest tech companies, can’t get PPP loans even if they are in need of the funds.

The SBA has some employee limit exceptions. Shake Shack, for example, got a PPP loan because of restaurant industry-specific rules. But it decided to return the funds as the company was able to access additional capital through an equity transaction in the public markets.

“The ‘PPP’ came with no user manual and it was extremely confusing,” Shake Shake’s chairman and CEO wrote in a LinkedIn post.

CBS News reported that Quantum, a publicly-traded computer storage company that had more than $400 million in sales last year, received a $10 million PPP loan. Quantum is based in Silicon Valley and has an office in Bellevue, Wash.; it lists more than 1,000 employees globally on LinkedIn.

GeekWire spoke with several startup founders last month who attributed their PPP application experience, good or bad, to the bank facilitating the loan. Ken Kamada, COO at aboutGOLF, said his longtime relationship with a Seattle-area community bank helped give his startup priority in the PPP process and land funding.

“Some banks are simply not SBA-approved lenders and their clients were left out in the cold,” he said. “Others took too long to process applications and their clients missed out on loans through no fault of their own. I’m not sure I have a better solution in mind, to be honest, but it feels like there could have been a more equitable way to disperse the funding.”

Terry Peterson, CEO of Pacific West Bank in West Linn, Ore., told the Portland Business Journal that 100% of its applications were approved. His firm turned its office into a “quasi war-room” while Peterson relied on trade groups and his network for advice.

Contentious opinions! Rough experience all around but in dozens of convos w/ small biz (mostly tech/media) here’s #PPPloan first round

Some entrepreneurs applied for the SBA’s Economic Injury Disaster Loan (EIDL), but many reported delays and confusion with changing guidance that limits loans to $15,000. Sue Sanford, CEO of Seattle-based B2B consulting firm Upstart Group, said her company received $4,000 from an EIDL advance but later found out that it will be applied to the PPP loan as a reduction in the forgivable amount for businesses.

Part of the issue is capacity. The SBA facilitated 63,000 loans amounting to $28 billion in the entire fiscal year 2019. Now the organization is lending nine times that amount — and possibly more — in a matter of weeks.

US VC investments reach $34B in Q1, but decade-long rise will likely subside due to COVID-19

Washington state rolled out a $5 million emergency grant program earlier this month to help small businesses with up to 10 employees. The City of Seattle gave $10,000 to 250 small companies last week as part of its Small Business Stabilization Fund; nearly 9,000 had applied.

The delays in government loans could force startups to shut down, either temporarily or permanently, since it’s unclear when shelter-at home orders will loosen. Nearly half of small business owners believe it will take six months to a year for the U.S. economy to return to normal, according to a U.S. Chamber of Commerce survey.

The median small business in the U.S. has more than $10,000 in monthly expenses and less than one month of cash on hand, according to the National Bureau of Economic Research.

As companies wait for help, many are laying off staff. Nearly 270 tech startups have cut 25,000-plus employees since March 11. The Wall Street Journal reported that the “second round of coronavirus layoffs has begun,” noting that higher-skilled workers are now facing the real possibility of unemployment.

Analysts say venture capital funding will likely slow as some investors will be more skittish about plowing millions of dollars into companies, at least for the time being. The IPO market has slowed, and the same could happen for M&A, a recent report from PitchBook and NVCA noted. Valuations, particularly for late-stage companies, will likely “be challenged” over the next few months.

“Startups will see some options for federal relief from the CARES Act, while others will look to alternative means for cutting costs and capital infusion,” Bobby Franklin, president and CEO of NVCA, said in a statement. “The reality is that it will be a tough road ahead in 2020, but as we’ve seen in past downturns, resilience is in the fabric of this industry. Some of the most successful venture-backed companies were born in difficult times.”

Editor’s note: This story was updated with more comments from CEOs and founders.