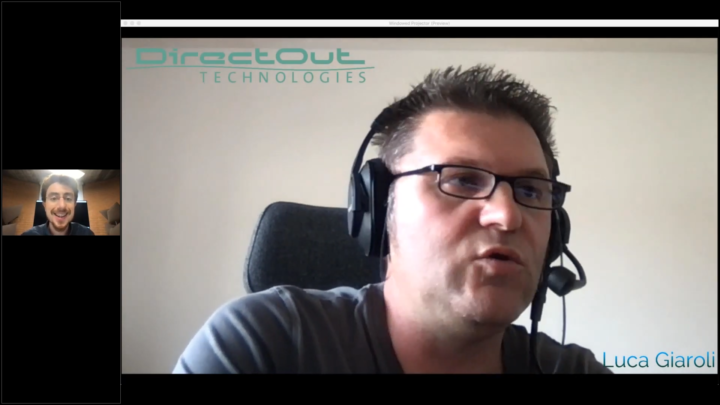 In this article we will summarize the work carried out by a team of the highest level, which used products of the Italian company DirectOut Technologies for connection management and redundancy of audio signals to UEFA Euro 2020.
DirectOut provided its skills and products to manage the opening ceremony and in particular the audio signals produced with Professional tools, mixed in real time by Arturo Pellegrini with representations of Andrea Boccelli and other artists performing on the playground. IT manager Claudio Scavazza was tasked with managing the network, Ethernet infrastructure and remote control.

In a webinar hosted by Luca Giaroli, the participants were able to discover all the connection diagrams, the DirectOut configurations Prodigy.MP via the globcon software and the various cases in the event of component damage.

The opening ceremony of UEFA Euro 2020 started at 8:35 p.m. and ended at 8:47 p.m. 12 minutes of show involving hundreds of professionals in which nothing could go wrong. It was therefore a question of making assumptions, preventing and reflecting on a whole series of inconveniences that could arise.
It all starts from show caller‘s two dedicated analog microphones, which set the times and actions to be performed and the choreographer who directed the dancers and performers, including those who employed the great Helium balls which were fundamental elements of the spectacle of the opening ceremony. The two signals were analogically separated and sent to the two Prodigy.MP from DirectOut (mp-1 and mp-2). 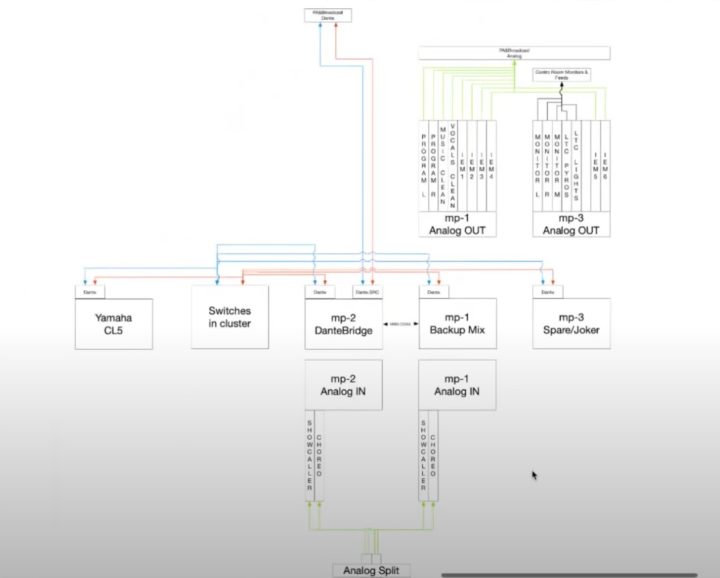 The last “interlocutors” of the mix and of the six signals of the various in-ear monitors prepackaged by Arturo Pellegrini, were the sound system and the Broadcast to which the signal processing was then delivered autonomously by the OBVan and by the amplification. stage. .
Seven signals were concerned, four dedicated to Boccelli and his wife, the latter equipped with a microphone to provide the artist with indications (without them being broadcast), and three signals dedicated to the different sectors of the show (dancers, acrobats, etc.).

The signals were delivered via Dante (primary and secondary), separate from the Dante network dedicated to sound reinforcement and broadcasting. For this reason, it was necessary to insert a dual Dante card into the Prodigy.MP mp-2, creating a bridge system that could make the two networks communicate.

The management of the redundancy for PA and Broadcast was managed in analog thanks to the mp-1 and mp-3 with 8 completely independent output signals. Specifically, the outputs of the mp-1 were: L and R program, separate music and voice, and 4 in-ear monitors. Instead, the Prodigy.MP mp-3 sent signals from in-ear 5 and 6, as well as control room monitoring and power signals and LTC signals for pyrotechnics and lights.

The Professional tools The system consisted of two mirrored MacBook Pros synchronized via midi, each managing 5 channels: ProTools L and R Main, two click tracks and the LTC signal. Since the Yamaha CL5 mixer was able to handle a primary and secondary Dante signal, but only one DANTE signal came out of each of the two MacBooks, backup and redundancy were handled in pairs. Prodigy.MP (mp-2 main and mp-back backup) connected to MacBooks via two Dante primary / secondary switches in trunking mode. 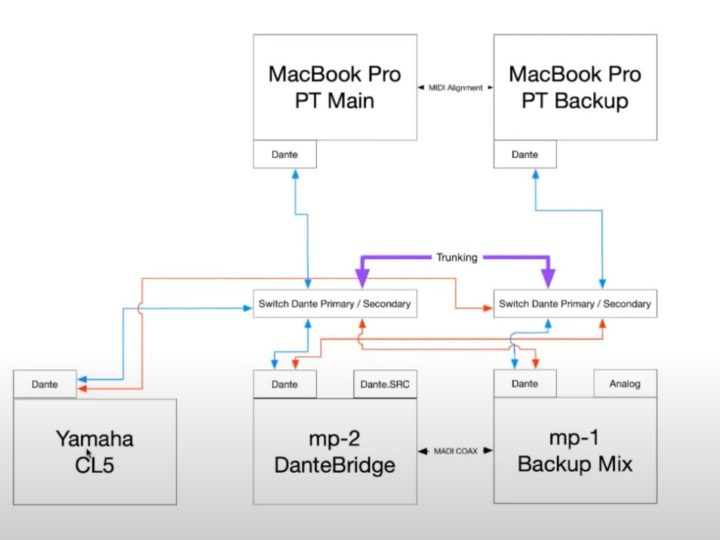 The redundancy diagram between Pro Tools and the Yamaha console

We are therefore talking about the redundancy of two ProTools systems with signals sent to two separate switches and two separate Prodigy.MPs, each of which can handle both the Main and the backup ProTools. By then connecting the Dante card of the Yamaha mixer to the two Dante switches, a coherent redundancy system was obtained with precise management of the primary and secondary signals.
The two Prodigy.MPThe s were also linked together via a two-way coaxial MADI signal which, if something went wrong in one of the two ProTools, still allowed the system to go through Dante’s secondary port.

During the webinar, Luca analyzed all possible error cases and explains in detail how the Dante signal patch was split and executed within the two Prodigy.MPs, as well as a simulation of the setup and operation of the system from the redundancy management point of view.

A particular role had the mp-1, called Backup mix and useful in case of problem with the Yamaha console. In fact, the mp-1 took the signal from Pro Tools redundantly, with the analog microphones split into analog and mp-2. If something went wrong, it was enough to set the machine’s internal dsp to be ready to act as a mixer, with a setting that was an exact replica of the mix set on the main mixer.

Thus, in the event of a problem with the main console, it was possible to recall a global snapshot via globcon which contained all of the local snapshots of the three in-game devices (mp-1, mp-2 and mp-3). Inside globcon a standard snapshot has been created which recalls the initial operation and two other snapshots which can be recalled in the event of failure on the Yamaha console or the Yamaha console and the mp-1. 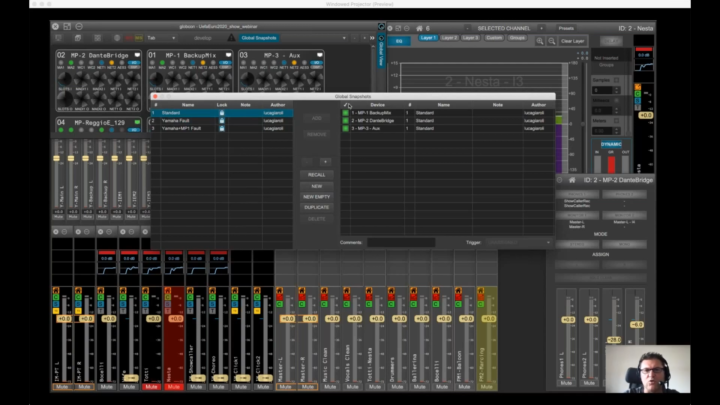 An additional level of “bad luck” could have been the shutdown of the mp-2. In this case, agreed with UEFA and without any manual intervention, everything would have become analog except for the flows coming from the field.

Precise, reliable and well thought-out work, thanks above all to the professionals present who were able to make the most of the functionalities offered by the DirectOut devices and the globcon management software.

Guido Block was born in Germany, but now lives in Milan, Italy. Music was his first love and it is his life. When not writing articles, interviews, live event reporting and product reviews for the Light Sound Journal Network, you can find him working in his recording studio or on stage, singing and playing bass with his rock band.

Who will be the Bundesliga Player of the Month for September 2021?

Elite round of the Futsal Champions League: Benfica, Barça, Tyumen in the final |…