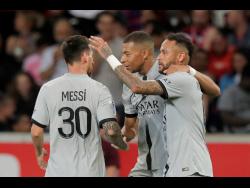 A total of €146m in additional penalties could be imposed if clubs fail to meet financial targets over the next three to four years that they have agreed in settlement agreements, UEFA said.

French champions PSG declined to comment on the deal, which covered the 2021-22 season when they added Lionel Messi to a superstar attacking line that already included Kylian Mbappé and Neymar.

AC Milan said in a statement: “We will confidently continue on the virtuous path towards financial sustainability.” The Italian champions were bought this week by US investors RedBird Capital Partners in a €1.2 billion deal that included the New York Yankees as a minority partner.

Sanctions covering the four financial years from 2018 – including two seasons in which club revenues were severely impacted by the COVID-19 pandemic – are set to be the last major set of cases under FFP rules that UEFA announced in April will now be modified.

UEFA launched the FFP a decade ago to monitor the income and expenditure of clubs that qualify to play in its club competitions to ensure they are approaching breakeven on their football-related activities. Clubs were allowed unlimited spending on stadiums and youth development projects.

Qatar-backed PSG had to pay UEFA €20m in 2014, while Abu Dhabi-owned Manchester City had to pay the same amount, in the first round of FFP deals.

Man City are among 19 named clubs that have only broken even on technical aspects, UEFA said, such as concessions made for pandemic seasons when many games were played without fans. Other clubs in this category are Barcelona, ​​Borussia Dortmund, Chelsea, Sevilla and West Ham.

Freiburg top Bundesliga as Bayern hold off at Union