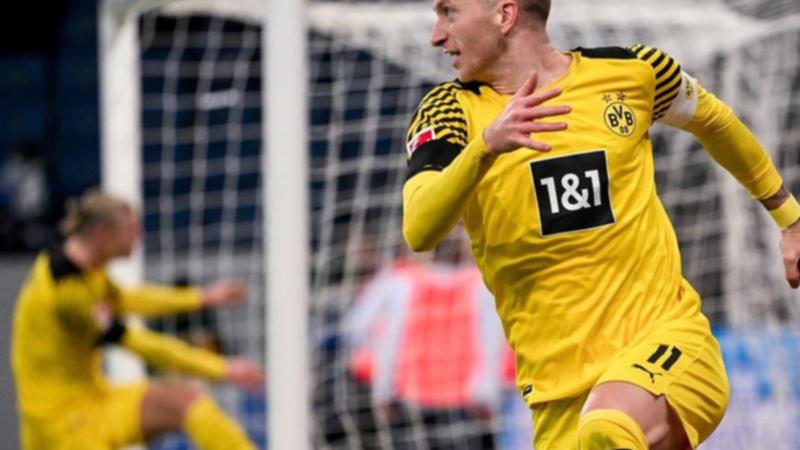 Borussia Dortmund bounced back from their German Cup exit in the second division St Pauli with a clinical display in Sinsheim, where they beat Hoffenheim 3-2.

Donyell Malen put the three in place on Saturday as Dortmund closed the gap on Bundesliga side Bayern Munich to three points, although the champions will have the chance to restore their advantage when they visit struggling Hertha Berlin on Sunday.

The only cloud for Dortmund was that Erling Haaland, who scored the opener, left in the second half with an apparent groin injury.

Haaland gave the visitors a great start in the sixth minute, heading home his 16th goal of the season from a Jude Bellingham cross.

Andrej Kramaric scored a deserved equalizer before the break, but Malen allowed Marco Reus to score with Dortmund’s second shot on goal in the 58th minute.

Malen also netted Dortmund’s next goal, with the Dutch winger crossing for Davin Raum to slot the ball past his own goalkeeper in the 67th minute.

Hoffenheim’s Munas Dabbur set up Georginio Rutter in the 77th for a thrilling final, but Dortmund held on.

It was Gladbach’s fourth successive league defeat at home, just days after leaving the German Cup in the second division in Hannover.

The latest loss puts pressure on manager Adi Hutter, who was already under scrutiny after losing six of the last eight games in all competitions.

Gladbach are just three points above the relegation zone and Hutter said ahead of Union’s visit that his side would be ‘several weeks’ without captain Lars Stindl, who suffered a knee injury in the practice on Friday.

Union, who were only promoted to the Bundesliga in 2019, moved up to fourth, the final Champions League qualifying spot.

Freiburg finished fifth with a 2-0 win over relegation candidates Stuttgart, and bottom-placed Greuther Furth picked up his second victory of the season with a 2-1 win over Mainz.

In the last game of the day, Cologne earned a 2-2 draw at Bochum.