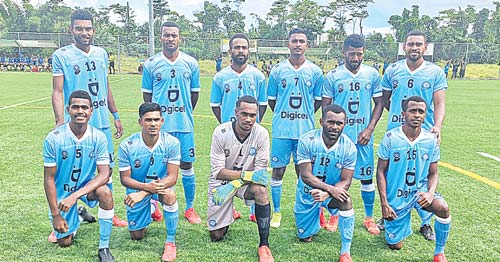 Tailevu-Naitasiri moved up to third on the Digicel Premier League points table after a hard-fought 1-0 win over Navua at Pacific Harbor yesterday.

Tailevu-Naitasiri suffered a heartbreaking 2-3 defeat against a much stronger Suva side a week earlier, while on the other hand, Navua came into the game having beaten Labasa 3-0 a week earlier.

The Navua defense failed to clear a long cross that fell on the legs of Tuiloma who shot from outside the box.

The teams rested with Tailevu-Naitasiri leading 1-0.

Navua came out strong in the second spell.

But it was Tailevu-Naitasiri’s stubborn defense that held firm.

Apart from a few half chances, Navua didn’t provide much attack on the opposing goal.

Veteran Simione Tamanisau came on as a striker late in the game and helped his side secure three crucial points.

“It was a quick game. We had our chances and we scored early. Navua also had our chances. I’m happy to see the team improving week by week,” he said.

Suva extended the lead when the game was resumed by Azariah Soromon, Samuela Drudru scored the third, while substitute Mohammed Sazil sealed the win.