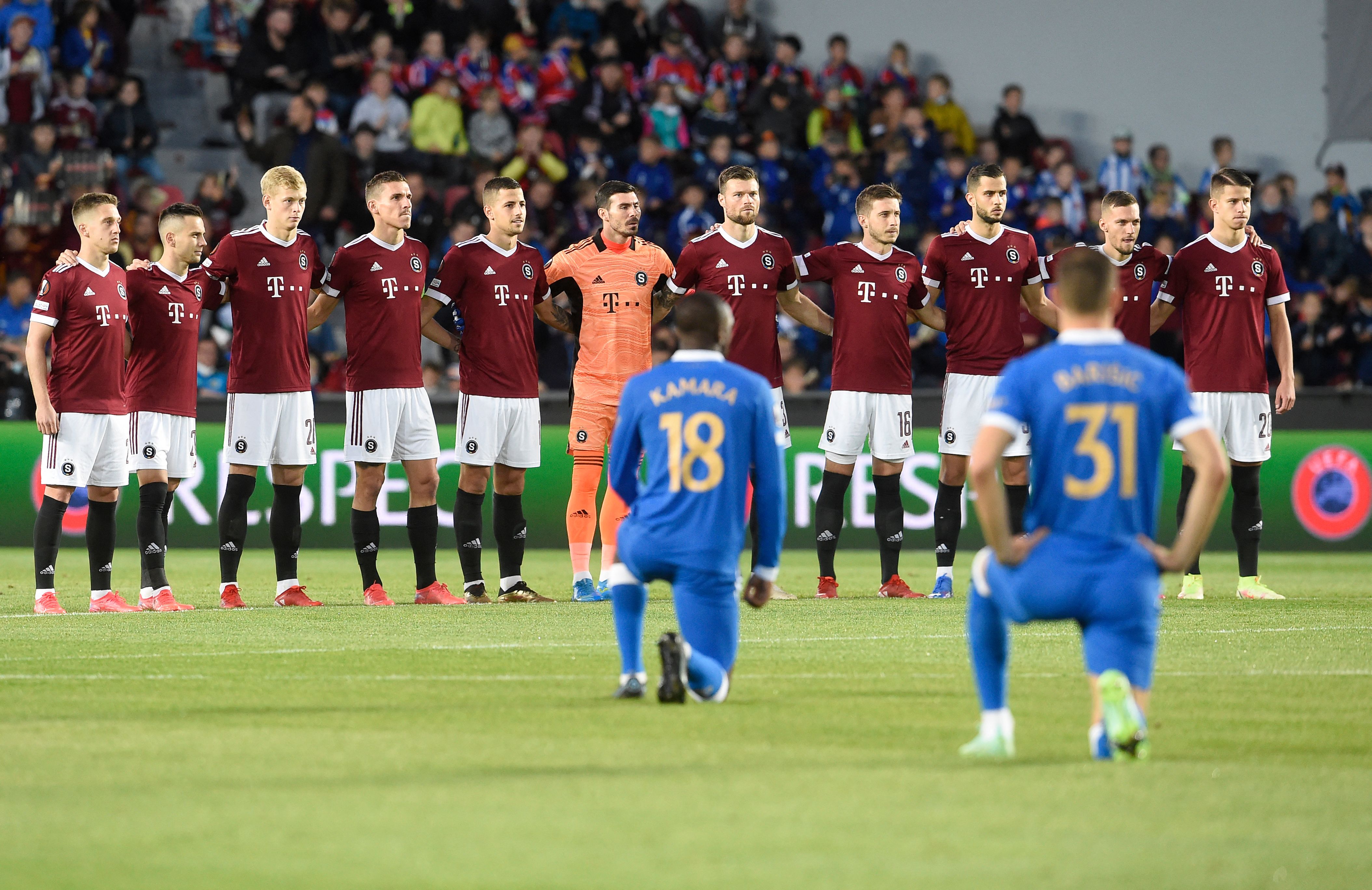 Rangers midfielder Glen Kamara and other black players on the squad were booed every time they were on the ball by a number of young Sparta Prague supporters during the Europa League game between the clubs Thursday.

Rangers coach Steven Gerrard told reporters after the match in which UEFA must deal with cases of racism in a more comprehensive and serious way:

â€œDuring the game I wasn’t aware, I just focused on the game and the tactical changes I was trying to think of to try to get us back into the game when we were lagging behind. facts and this is the truth i am extremely disappointed but not surprised what i am saying is we need the facts … but if they are and they were targeting glen, c This is extremely disappointing because the reason there are so many children in the stadium is because of previous similar incidents, so of course it is extremely disappointing if that is the case. More needs to be done. No only myself, but everyone across the world is calling for more punishments in terms of racism, it needs to be stamped out. But until the powers that be do more and deal with it more seriously – until this will happen – we will be dealing with these issues for a long time. “

Because Sparta was being punished for racist chants in a game against Monaco earlier this season, Thursday’s game had to be played without fans. But 10,000 schoolchildren were admitted and reportedly continued disturbing story racist behavior by fans:

Sparta Prague fans racially abused Monaco’s Aurelien Tchouameni and therefore had to deal with the stadium closure tonight against Rangers.

The only exception is that 10,000 local children under the age of 14 are present, but Glen Kamara, racially assaulted by Ondrej Kudela from Slavia, is now booed on every contact.

I noticed that Roofe, Sakala and Aribo get it too, yes. Definitely even more pronounced when it comes to Kamara.

Glen Kamara is booed beyond any other player tonight against Sparta Prague. In a stadium full of children. Think about it. Repugnant. #kickitout #Notoracism pic.twitter.com/wcPix9XePq

Children boo Glen Kamara. I have to ask you why and how we got here.

I can’t remember a more miserable spectacle / noise in European football lately than thousands of Czech kids booing every touch of Glen Kamara for Rangers against Sparta Prague. Inside a stadium supposed to be closed by UEFA due to fan racism. Appalling.#NoToRacism #Europe

Glen Kamara boos every time he touches the ball in the game @EuropaLeague this evening is shameful. Football is not separate from society, in fact it holds a mirror in front of it in many ways. THE’@UEFA must toughen up and really set an example for repeat offenders.

This is not the only time Kamara has been the victim of racial abuse in the Czech Republic. Ondrej Kudela from Slavia Prague was banned for 10 matches by UEFA in April for racially abusing Kamara, after being seen yelling in the Rangers player’s ear.

“UEFA should have imposed a minimum one-year ban rather than a symbolic 10-match ban,” Kamara’s lawyer Aamer Anwar said at the time. “Under UEFA’s disciplinary regulations, Kudela could have been banned for ‘at least ten matches or a specified period of time’, and we firmly believe that UEFA should have made use of the important discretion which she was willing, to send a much stronger message that this type of heinous behavior will not be tolerated on the football field. “

â€œI had hoped when I heard about the closing of the Sparta Prague stadium that Glen and the other black players would not suffer abuse or racism and could just keep playing football.

“But this evening should be embarrassing for the Czech team which, despite the ban on its supporters, makes little difference that the stadium is filled with 10,000 schoolchildren.

“A huge proportion of these kids booed every touch of Glen’s ball along with all the other black Rangers players. Tonight once again shows that Prague has a serious problem with racism and, as usual, UEFA is nowhere to be found. .

“The Glen and Rangers players showed total class, but no player should have to face that in their job and on the European stage.”

It’s unclear how UEFA might punish Sparta Prague for this latest example of racist fan behavior, although critics of the organization’s response to racism in the past are unlikely to be happy if UEFA chooses to ‘simply ban fans from Sparta Prague’s home matches in the Europa League.

It is not clear whether UEFA would consider removing the club from the competition altogether, given this second case of racist abuse by fans in the past two months.